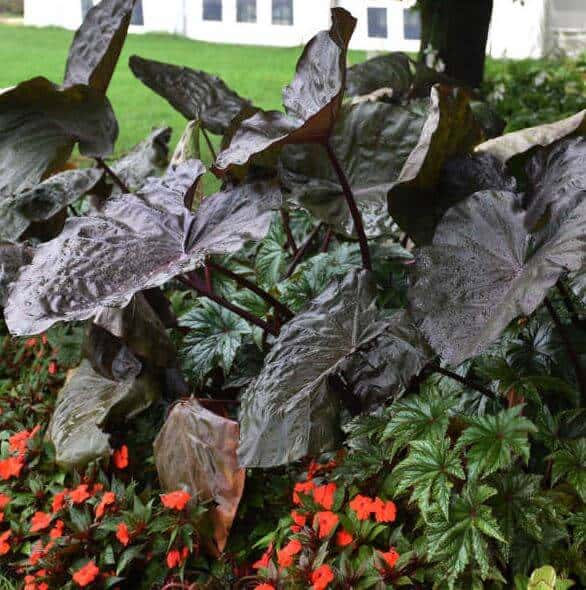 Colocasias belong to the Araceae family and are thought to have originated in Southeastern Asia where they are often referred to as taro, dasheen, cocoyam, eddo, and godere. These plants are typically grown in swampy zones or paddy fields in wet environments for their sweet tubers, which are edible. They can grow on land that has experienced flooding.

The Colocasia “Distant Memory” is a hybrid cultivar of Colocasia that is the result of cross-breeding between a “Colocasia Thailand Giant” and the “Colocasia Black Coral”. It was developed at Walter Gardens by Hans Hansen as early as 2013 but was only patented in 2018 (PP30292).

This tropical plant is characterized by large dark mahogany-hued glossy foliage that is inclined to crinkle. It has a clumping nature and full growing habit. Generally employed as a landscaping plant, it features huge heart-shaped foliage that cascades as it grows. In the spring, leaves begin with a grayish-green color that gradually turns burgundy with black hints with the arrival of warmer weather. Stems are a vibrant dark red adding to their unique appearance.

With maturity, the Colocasia Distant Memory can reach five feet in height and width with maturity. It is a perennial but will behave as an annual if subjected to winter weather and will require substitution the following spring.

This plant deserves a word about its symbolic nature. Walters Gardens, where it was created, is a family business. Harriet Walters was the heart of the business and sadly was diagnosed with Alzheimer’s Disease and passed away in 2008. Walters Gardens, in keeping with the Alzheimer’s Disease symbol, the Elephant because it never forgets, selected this Elephant Ear hybrid as their plant symbol in battling the disease and donate a portion of all sales of this hybrid to Alzheimer’s research. It is commonly called the Memory Elephant Ear plant. 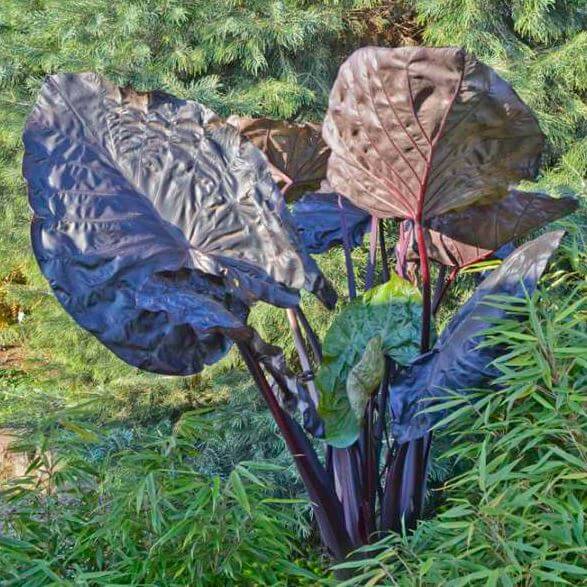 A low-maintenance plant, the Memory Elephant Ear can be used for landscaping, as an accent plant, or as a container plant.  It can be cultivated outdoors in USDA hardiness zones 8 through 10.

While not demanding in terms of soil types, it will thrive in rich fertile soil that has good moisture retention. It does not have a specific preference for soil pH. To mix your own, combine equal parts of potting soil, compost, and aged manure, then add in some fertilizer or worm castings.

Soil beds should be mulched in areas where the plant is hardy during the winter so that the main tuber is adequately protected.

The Memory Elephant Ear plant does best in a full sun environment with a minimum of six hours as long as it has adequate humidity and moisture. In dryer climates, it would be better located in partial shade but with a minimum of four hours of direct sun exposure. 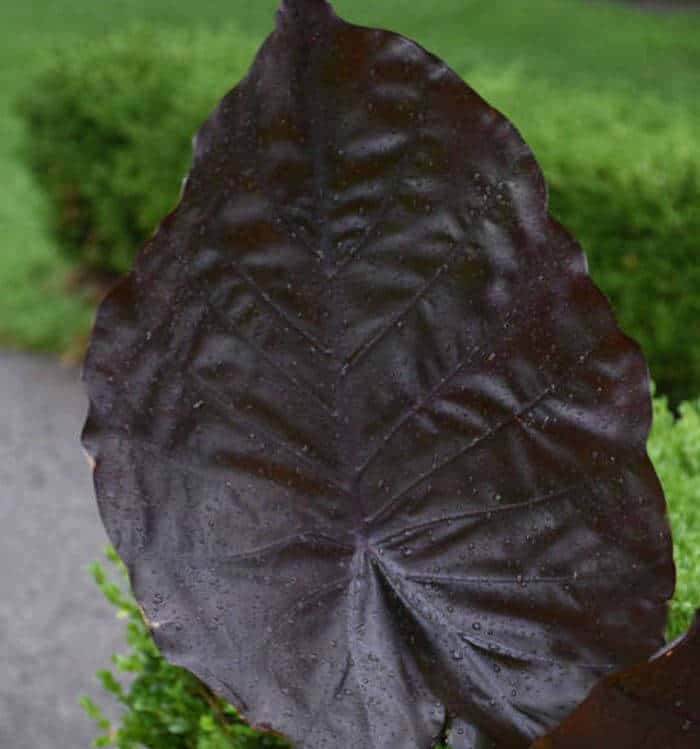 A moisture-loving tropical cultivar, the Colocasia Distant Memory needs its soil bed to remain consistently moist, almost wet, for it to reach its maximum potential in size and beauty. It, in fact, will perform nicely when located at pond or bog edges.

Underwatering can cause stunted growth, yellow leaves, or brown leaf edges. Overwatering is characterized by moldy soil, yellowing mature foliage, or the collapsing of the plant’s base.

Colocasias enjoy higher levels of humidity. Use a humidity pebble tray underneath your indoor plant or a small space humidifier. Leaf tips may brown or curl if humidity is too low.

Colocasias can be grown indoors all year long, but the foliage will suffer and die back if the environmental temperatures fall below 70°F.

These plants are not frost tolerant and will not survive when exposed. You can dig up outdoor plants and place tubers in a cool, dry spot during the winter. Remove foliage before storing. Replant your tubers in a warm spot the following spring. 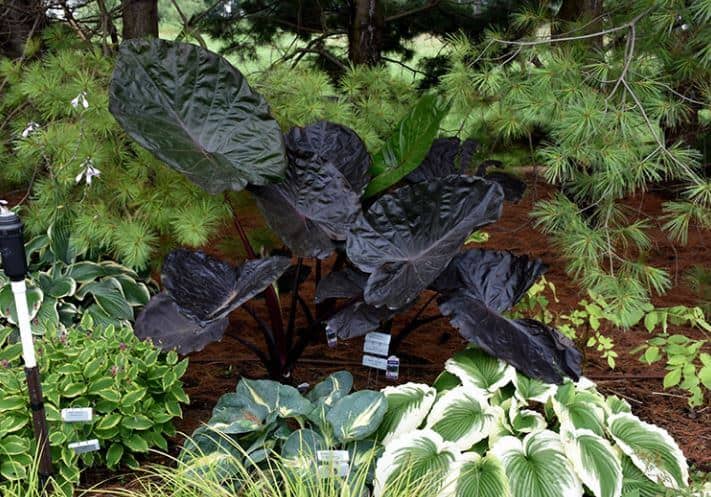 Colocasia feeds heavily, so the soil bed will need to be fertilized with organic nutrients or hummus. For indoor houseplants, use a balanced fertilizer, preferably liquid for monthly feeding.

Remove all dying and yellowing foliage as well as plant debris.

For container cultivation, plan on repotting every third year to the next size pot. Water your plant the day before repotting to lessen the shock.

If you find your plant’s foliage declining in the fall and winter as this will happen with dormancy. Reduce the watering and fertilization. Allow the soil bed’s top half to dry out before watering. If your plant loses all of its foliage, reduce watering even more to reduce mold and fungal infections in the soil as well as root rot. 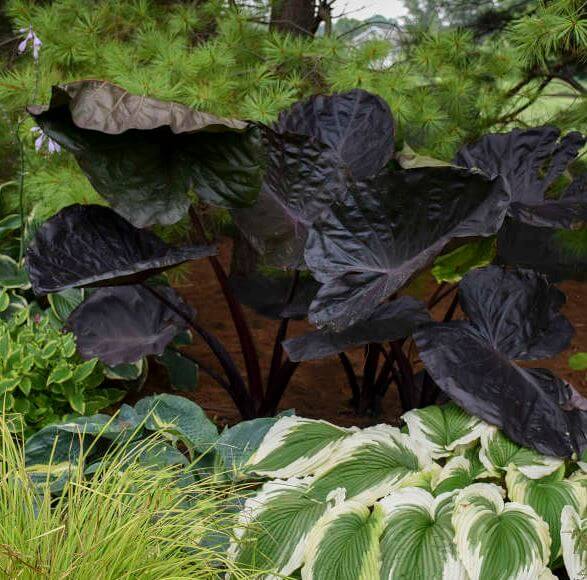 As this is a patented cultivar, you will need to verify if there are restrictions for propagation. Distant Memory Colocasia grows from bulbs or corms.  For indoor cultivation, these bulbs should be planted in large containers in the spring.

Plants can also be propagated through offsets at the base of the plant. They can be separated when the offset has at least three leaves and some root system. Water the new soil bed a day before you move your offset to its new home.

Happily, the Distant Memory Colocasia is resistant to both rabbits and deer, so it makes a great outdoor choice for those interested in garden cultivation in areas with a local wildlife population.

Slugs and snails are attracted to the younger foliage, so protect your plant if they are common to your area. Indoors, watch for evidence of spider mites or whitefly infestations and treat with insecticidal soap or Neem oil.

Yellowing foliage will indicate a problem with either feeding or watering, so reevaluate your care schedule.

Plants can enter dormancy in the fall if the temperature falls below 70°F.

All plant parts are toxic when ingested and can cause irritation to the skin.

Rare Hoya Plants List To Add To Your Collection

How to Get a Snake Plant to Grow Straight Up

How to Train a Pothos to Climb

The 7 Best Plants for Basement Windows

Houseplant Tips: How to Make a Monstera Climb