Who would have thought that a plant can blush, and yet that is exactly what the Neoregelia carolinae can and does do. Also known as the “Blushing Bromeliad”, this plant has a unique characteristic. The plant’s center will turn red when it is ready to flower, and for this reason, its popular name refers to “blushing”. In fact, its blooms are actually pretty ordinary. It’s the talent for blushing that sets this plant apart from the crowd.

Native to Brazil, the bromeliad belongs to the neoreglia genus within the Bromeliaceaeor pineapple family. The Blushing Bromeliad is one of the most common Bromeliad plants to be cultivated indoors. They can be cultivated outside in USDA hardy zones 10 and 11. 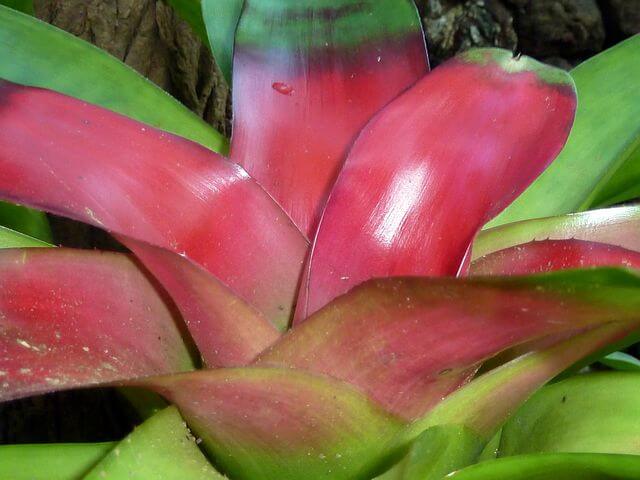 This bromeliad is an epiphyte in its natural habitat of the rainforest where it grows on trees or on the rainforest floor amid other vegetation. The characteristic of bromeliads is that they collect the water they need in their center cups. Root systems are small and have the primary function of attaching themselves to their support or hosting surface.

Bromeliad leaves are long, narrow, and lance-shaped and form a rosette. The foliage is glossy with saw-like edges. As they grow, to about a foot in length, they arch outward. The Carolina tricolor is a particularly stunning cultivar as leaves feature green and whitish stripes.

The Blushing Bromeliad will become a shade of red just before it flowers. A cluster of smallish violet-hued blooms will appear. Once the plant has flowered it will begin to die off as it prepares to produce pups at its base for the propagation of the species.

Bromeliads generally require three to five years to produce flowers, and the flowers can last as long as six months.

Caring for a Blushing Bromeliad 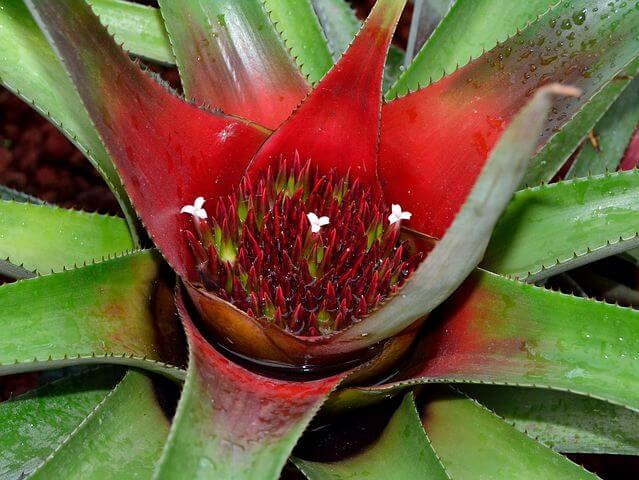 Bright light, warm temperatures, and a slightly humid environment will make for a happy and easy-to-care-for houseplant.

As an epiphyte, this houseplant will do well when the soil mixture includes bark, perlite or coarse sand, and peat. Blend these components in equal parts to create a loose, well-draining growing medium.

The Bromeliad’s natural habitat is the South American rainforest, so it loves bright light that is filtered. Find a spot that offers a combination of bright indirect light and a bit of shade for the best results. It is important not to expose it to direct sunlight. 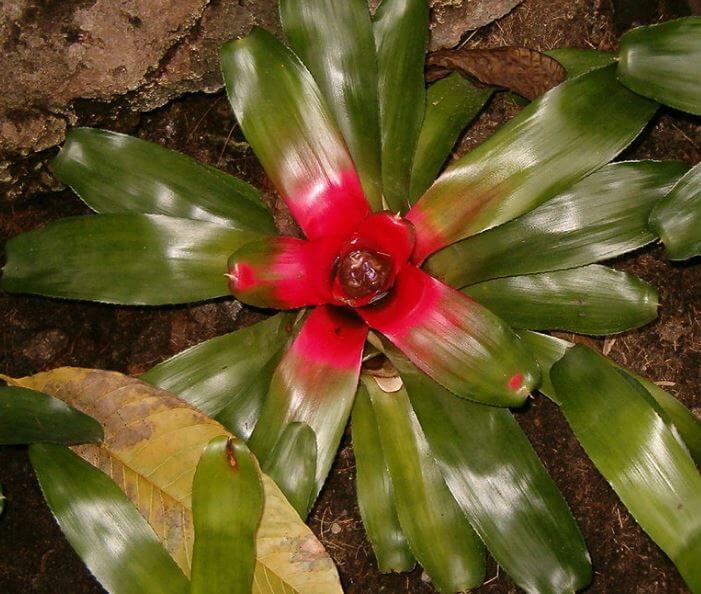 Ideally, bromeliads should be watered using their central cup. Water this natural central container with either distilled water or collected rainwater, changing it monthly or every six weeks to prevent bacteria growth and avoid the water from becoming smelly. Water needs to be free of chlorine and other chemicals that municipal water may contain. The center cups should be always filled with water. Soil should be evenly moist but never soaked and should only be watered when it dries out.

Soggy soil will inevitably lead to root rot and the early death of your plant.

Your bromeliad prefers average to above average humidity to thrive. During the winter when the heating is in use or in warmer summer weather, it’s advisable to mist bromeliads. You can also integrate a pebble tray or water-filled receptacle near your plant to increase local humidity. Leaves that turn brown are generally due to air that is too dry. Good air circulation is vital to prevent disease and eventual pest infestation.

The bromeliad likes a warm environmental temperature measuring between 65° and 80° F. Do not expose bromeliads to temperatures lower than 55° F. Temperatures need to measure an average of 79° to flower. 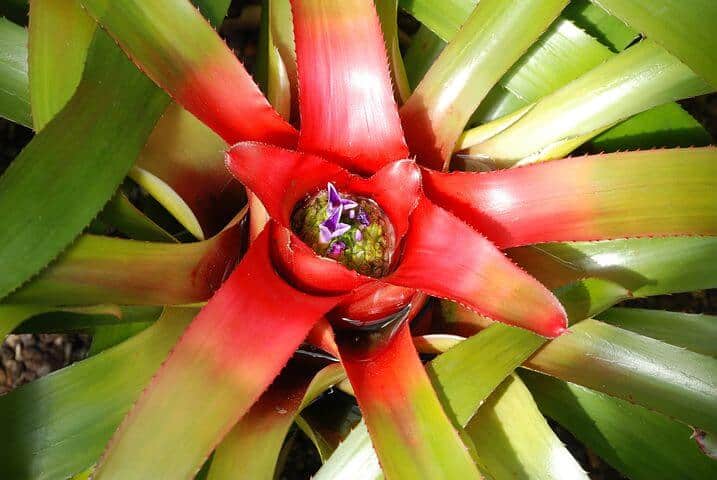 Bromeliads, as epiphytes, do not require much fertilization. If you wish to feed your plant, do so monthly by adding a liquid fertilizer diluted to half-strength to a spray water bottle. Feed sparingly, during the growing season as excessive fertilization can cause the foliage to lose color. It is unnecessary to feed a Bromeliad during the winter as this may burn your plant.

Bromeliad pruning is limited to removing dead foliage so that the plant is tidy in appearance. The removal of dead leaves will also create space for new offsets to emerge. Remove foliage at the leaf base with sharp scissors or a garden knife. 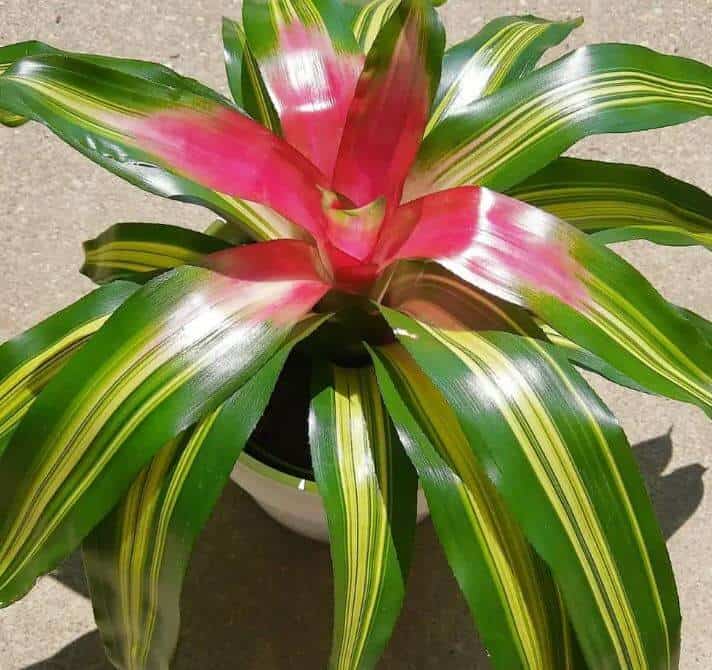 Bromeliads only require repotting if the container is too small. Roots systems are very small and will rarely completely fill up a pot. Nonetheless, the soil mixture should be renewed annually. If the new soil contains nutrients, avoid fertilizing for the first two months.

Pots should be heavy to avoid the bromeliad toppling over. These plants can become top-heavy. The container should also be shallow as root systems do not require depth. You may want to provide some type of support for your Bromeliad as it grows. 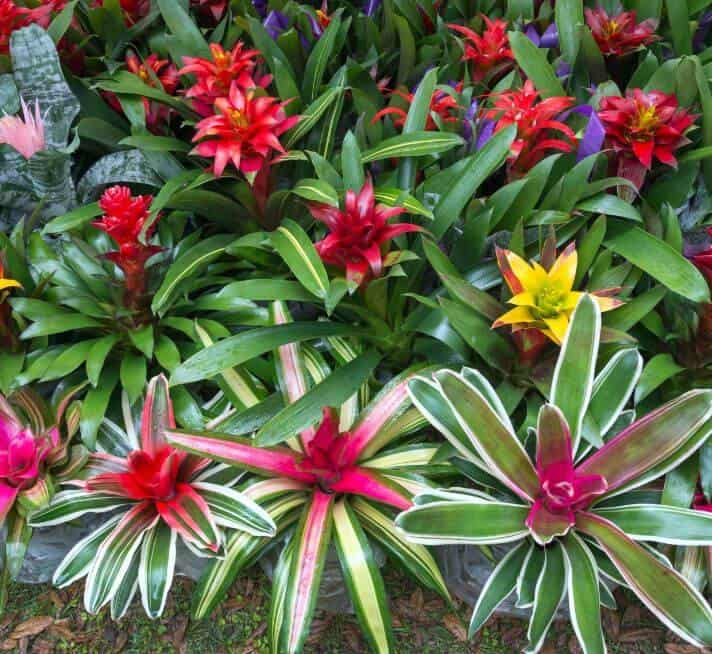 Once a bromeliad flowers, it begins to die and during this period will produce offsets or pups. The plant’s energy will be dedicated to the pups and not to foliage. To propagate un bromeliad, offsets should be cut off as close to the mother plant as possible. The offsets should grow to at least a third of the size of the mother plant and have already begun to form roots before being separated and replanted.

Once pups have been separated, they should be planted in bark soil that drains well. Place them in a warm location that is shaded until the offset has established itself and normal bromeliad care can begin.

Here are several of the most common problems encountered in bromeliad cultivation.

The air is too dry from a lack of humidity. Mist or use a pebble tray to raise the humidity around your plant.

If your Blushing Bromeliad is exposed to direct sunlight, this can cause brown patches to appear on the foliage. Move your plant to a spot with filtered bright light or partial shade.

If foliage is dark, soft in texture, and begins to droop, your bromeliad is not receiving sufficient light. Move the plant to a spot with more access to bright indirect light.

Bromeliads are susceptible to mealy bugs and scales. Should these appear on your plant, isolate it to avoid them invading other houseplants.

Growing the Beach Spider Lily as a Houseplant