A Popular Epiphyte: the Corsage Orchid

Orchids offer a delicate exotic appeal to any décor. One of the most popular orchid types, particularly for use as cut flowers, is the Cattleya Orchid. This delightful bloom grows in many colors and lasts quite a long time. Also known as the queen orchid, women wore them for special occasions. The orchid wrist corsage became a favorite for formal dances during the last century.

This orchid species is referred to as the corsage orchid as it was often employed as just such an accessory for women in evening dress. Flower corsages date back to the ancient Greeks when they were worn for weddings. The Greeks believed that the floral fragrances emanated and warded off evil spirits from all the females wearing them. Throughout the course of time, flower corsages including the orchid corsage became luxury items.

The white orchid corsage is generally used for ceremonies, and specifically for weddings. White orchids are considered to represent innocence, beauty, and purity.

The first recorded reference to the Cattleya appears to date to 1818 in the greenhouse of Dr. W. T. Hooker in Suffolk England. Apparently, however, the English moss collector William Swainson was collecting random orchid leaves as packaging for his specimens in Brazil’s Organ Mountain forests at approximately the same time.

It appears some of Swainson’s orchids reached William Cattley, an orchid aficionado who then cultivated them. His exemplars bloomed in 1823 and several were sent to Dr. John Lindsey, an orchidologist for study. Lindsey wrote about these fascinating blooms in his thesis, the Collectanea Botanica (t.33 1824). A new orchid genus was established with the name Cattleya labiate.

All About the Cattleya Orchid

Native to Central and South America, the Cattleya prefers warm climates with medium light exposure. Blooms are large, with the biggest flowers measuring as much as five inches in width. They come in multiple colors and produce a lovely fragrance. The Cattleya orchid generally blooms once annually with flowers lasting two to three weeks. Some of the newer hybrid varieties can last as long as five to six weeks.

To experience successful blooming, these plants require filtered sunlight during the day and cooler temperatures at nighttime. When temperatures reach 55°F, the flowering cycle will begin.

Foliage is long and grows from flower parts known as pseudobulbs or rhizomes. It is the rhizomes that contain nourishment and water for the orchid plant. The point where the plant leaf meets the rhizome is where the bloom sheath will emerge and then flower.

Orchids are divided into two separate groups, unifoliates and bifoliates.

Both types have naked stems with showy flowers that produce strong fragrances. Blooms can last on plants from one to two months.

As an epiphyte, the corsage orchid does best in soilless growing mediums such as rocks, bark, or perlite because their root systems require air. In natural habitats, epiphytes grow on trees or rocks, surfaces that are soilless. Wet soil will be fatal for an epiphyte.

Orchids are best grown in clay pots to help with the evaporation of excess water. Many growers use transparent containers to aid in exposing roots to sunlight.

Orchids do not do well in direct sunlight as exposure can burn foliage. Medium-filtered light is ideal. This plant will tolerate direct light in the morning but avoid this in the afternoon when the sun is too strong. If you experience difficulty in providing the proper lighting, opt for artificial lighting as many breeders do. Foliage should be a medium green hue with rhizomes that are erect and ideally do not require staking.

The Cattleya orchid prefers a growing medium that dries out from one watering to the next. Plan on watering once weekly or every ten days. To water your orchid plant, place it in a sink or bowl of tepid water for several minutes allowing for a good soak. Allow it to drain before returning it to its location. Seedlings will require constant moisture as will growing plants in comparison to resting orchids.

Orchids do best in humidity measuring between 50% and 70%. Ideally, place your orchid container on a pebble tray so that the evaporation of the tray’s water increases the humidity directly around the plant.

The Cattleya orchid thrives in temperatures ranging from 55° F at night and as high as 90°F during the day. Orchids can be moved outdoors in summer if the temperature drops in the evening. They will tolerate temps that measure between 90° and 95° F if air circulation, shade, and humidity are increased to compensate for the heat increase. 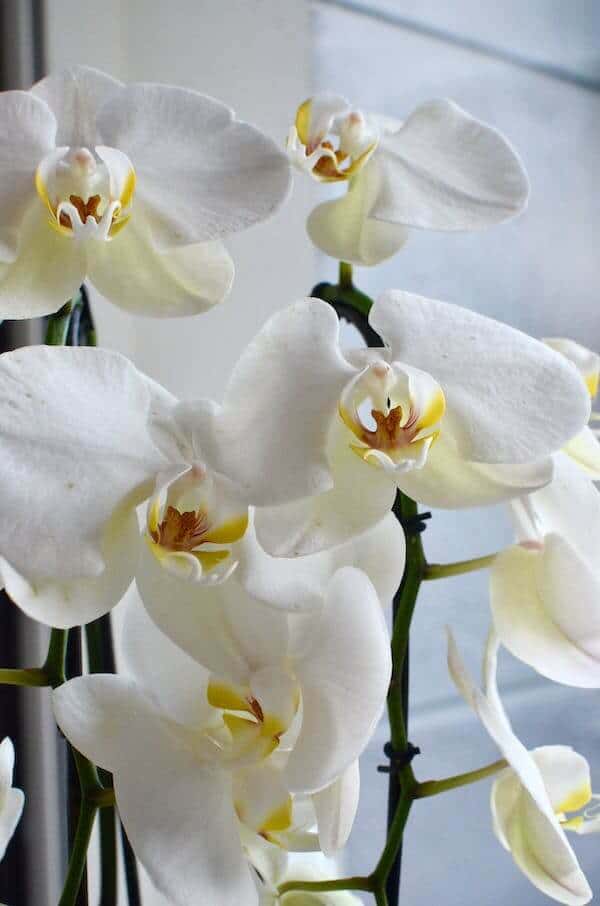 Orchid flowers should be trimmed off once they are spent. Prune flower spikes at the base of the rhizome or pseudobulb.

If the orchid’s rhizome expands over a pot’s edge or if the growing medium begins to decompose and drainage becomes difficult, it’s time to repot. The best time will be before new roots emerge from the plant’s rhizome, in the spring, or after flowering is finished.

Plan on repotting every two years in the spring before new roots emerge. If you opt to divide when repotting, be sure to retain at least three to five stems on each section. Always position the cut rhizome against the container’s side. 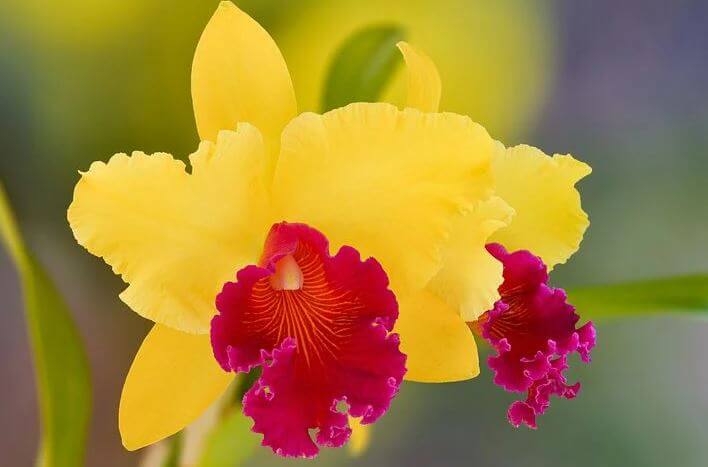 Corsage orchids should be propagated once the blooming period has passed in the springtime. Orchid propagation is done through division. Plants can be divided if there are at least three shoots in each divided section.

There are several potential dangers to orchid cultivation.

If an orchid does not receive adequate light, it will not bloom. Older blooms can also die off and be replaced with weaker and smaller ones. Too much light can burn leaves. Proper light will resemble that of the Cattleya’s natural habitat. Bright filtered light is your objective. 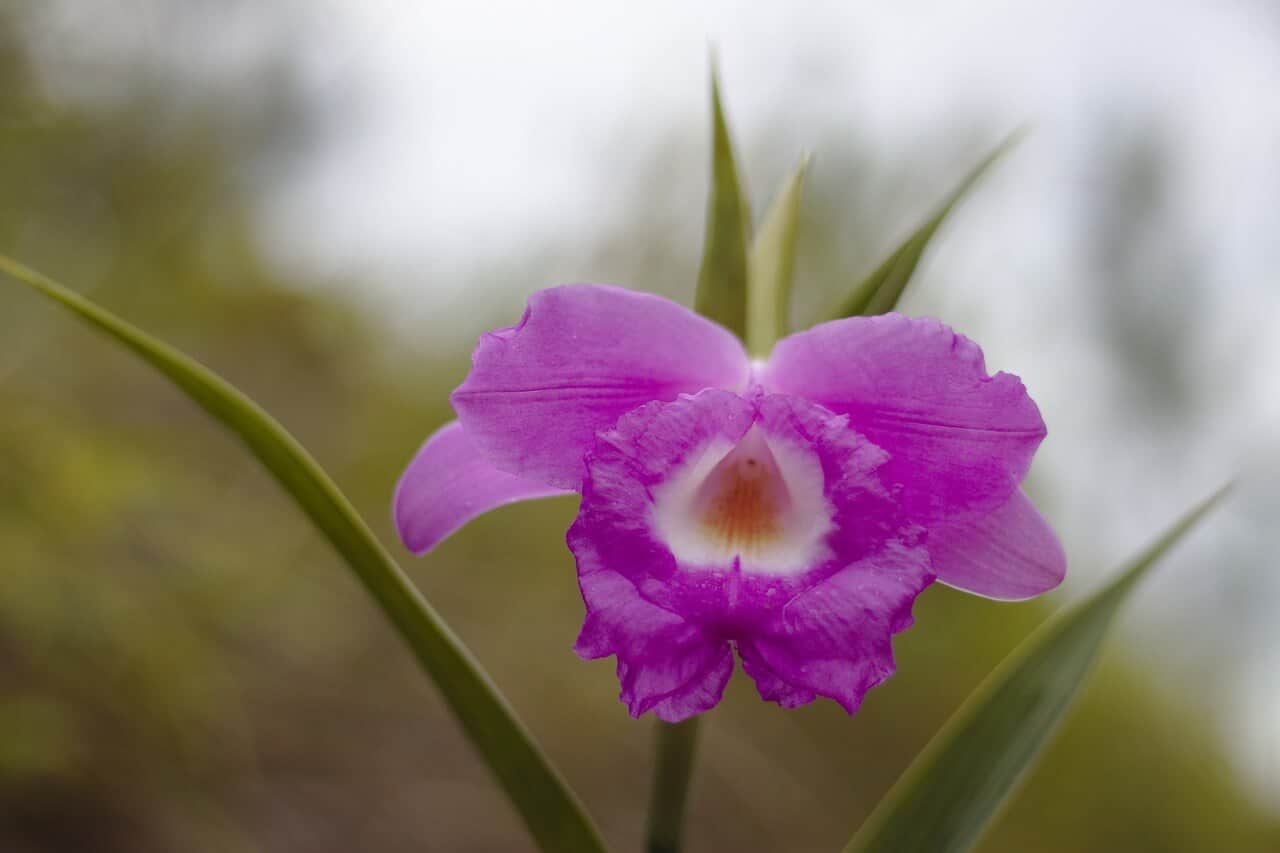 Like in the case of many, if not most houseplants, overwatering will cause root rot.

The most common pests to afflict the corsage orchids are aphids, red spider mites, scale, and mealy bugs. Scale and mealy bugs insect species can be removed manually. After removal, treat your plant with organic Neem oil to eliminate any remaining pests and prevent further proliferation.

Mature pseudobulbs turn brown or white. These “sarongs” should be peeled off and removed to avoid pest infestations. After several seasons, these rhizomes will shrink and should be cut off when you repot. Should this flower sheath turn yellow before a new flower spike emerges, sheath blasting may have occurred.

Sheath or bud blasting occurs when there has been an abrupt temperature change. Condensation forms inside the sheath and this rots the newly forming flower spike. In these instances, sheaths need to be gently cut away and removed.