Kiwifruit In The Home Garden 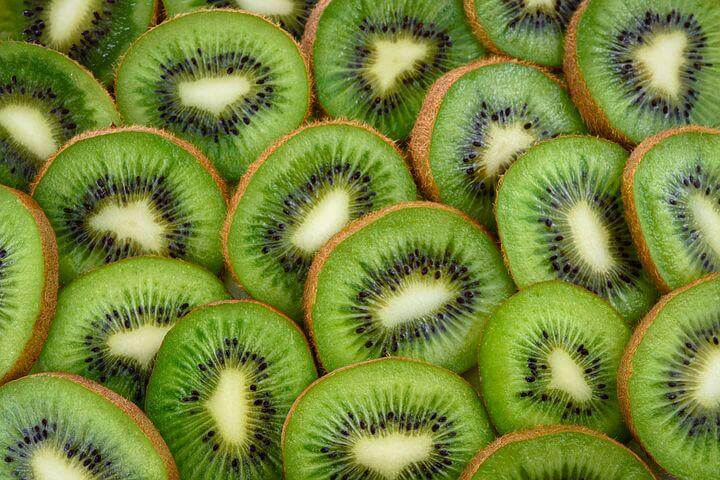 Looking for original nutrition-packed fruit to cultivate in your home garden? Look no further! Kiwifruit is packed full of nutrients and can be grown in both colder regions and areas that are frost-free.

Commonly perceived as natives of New Zealand where most of this fruit is cultivated, kiwifruits are not native to New Zealand. The Kiwifruit, botanically named the Actinidia deliciosa, finds its natural habitat in the more temperate regions of southwestern China. Originally referred to as the “Chinese Gooseberry”, it made its way to Europe, New Zealand, and the United States at the beginning of the 20th century.

The other principal type of this fruit, known as the Hardy Kiwi or Actinidia arguta, is native to Japan, northern China, and the Korean peninsula and is referred to as Baby kiwi, Kiwiberry, Grape kiwi, Dessert Kiwi, and Cocktail Kiwi. It is rich in fiber, potassium, vitamins A, C, and E, iron, and calcium. 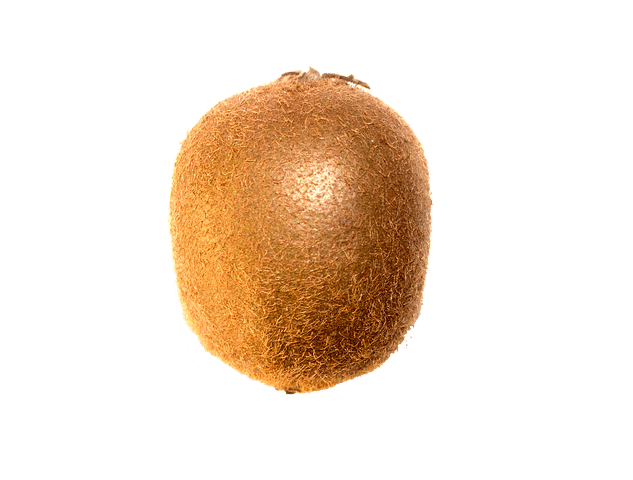 These two varieties of kiwi are grown successfully in home gardens, and they grow on vines, not trees. We are most familiar with Kiwifruit, which is a fuzzy brown egg-shaped fruit found in the produce department of local grocery stores. Hardy Kiwi, also known as the Kiwiberry, is green, smooth, and the size of a grape. It is also said to have a sweeter taste than kiwifruit. Another popular cultivar of Hardy Kiwi is the Actinidiakolomikitawhich is often cultivated as an ornamental plant due t variegated pink leaves and the fragrant blooms that it produces.

These varieties of plants vary in terms of growing environments. The Hardy Kiwi can be grown in colder regions such as USDA Hardiness zones 4 through 7. This variety can survive temperatures below zero. The kiwifruit should be cultivated where frost is unusual such as in USDA zones 8 and 9. Ideally, both cultivars will do better in zones where frost is rare if not unheard of for at least 200 days of the year. 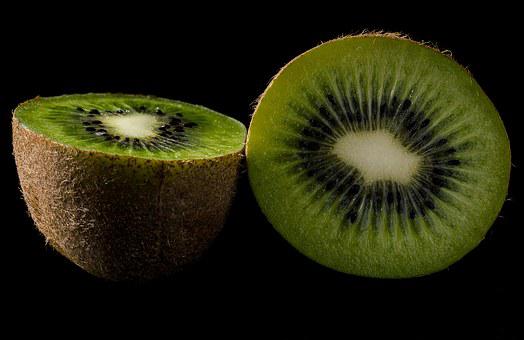 It’s fundamental that when cultivating kiwi in your home garden, you have both male and female plants if you want to produce fruit. The male kiwi plant produces blooms, while the female plant will produce blooms and fruits. There is one known hardy kiwi self-fertilizing variety named “Issai”.

Kiwis should be planted in the spring once the final frost has passed. You will need to be patient, as these plants need 3 to 5 years to begin producing fruit.

Kiwi vines will require a sunny location, but they should be positioned where they will be protected from the wind. For those planting in colder areas, choose a northern spot on your property to avoid any damage that may occur between freeze and thaw at the beginning of every spring.

Kiwi vines need soil that is well-draining as they can be subject to root rot in overly wet conditions. They will also require growth support. Trellis systems should be sturdy and ample as they can grow 20 feet long and 15 feet wide. Successful plants can grow as much as 100 lbs. of fruit.

To begin you need both male and female kiwi plants. The recommended ratio is one male plant to every six female plants. Vines should be planted at least 10 to 15 feet apart. Before planting, check the length of the roots. If they are exceptionally long, trim them. Vines need only to be planted deep enough to cover the root system. Water thoroughly when planting. 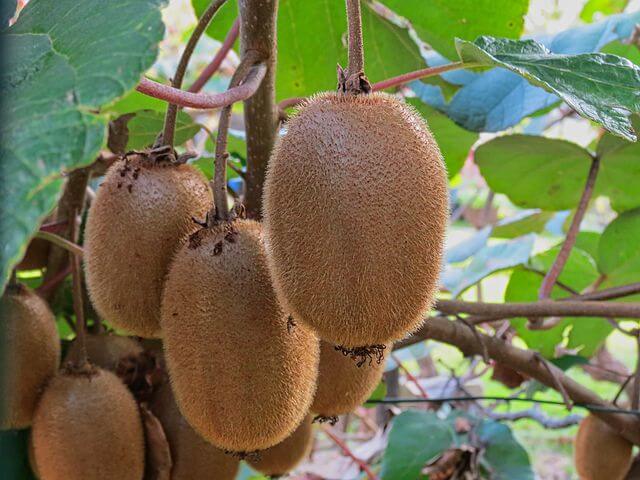 If your area has sufficient rain, you may not need water. If not, you will need to supplement water supplies during dry bouts, especially in summer.

Avoid feeding your kiwi vine during its first year. In the second year, you can apply soybean meal, or a quality balanced fertilizer in the springtime. Begin to train the vines onto a support structure during the first year of planting while they are flexible. Trim any lateral growth along the vine if it is not flowering. During the growing season, you can prune several times.

The kiwi plant will produce both its flowers and fruit on older woody vines. Remove any young water sprouts and offshoots from the trunk. Female vines need to be pruned in the winter during the plant’s dormancy. Male plants can be pruned in the summer once flowering has finished.

If you are cultivating in a colder region, know that your plant may die back completely to the ground on its own. Trim and remove dead vines. Mulch your plant with straw or leaves. 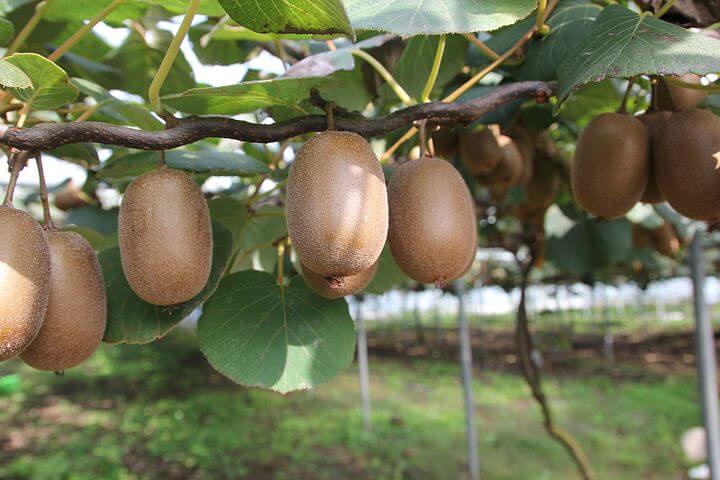 You can propagate kiwi from the fruit seeds. Simply remove seeds from a mature kiwifruit and dry them for two days. Place your seeds in moist perlite and refrigerate (not freeze!) for a couple of months. Then sow the seeds in a moist potting mix approximately 1/8 inch in the soil bed. Cover the pot with plastic wrap and place it in a bright warm spot. The soil must be kept moist.

Once the seeds have germinated and seedlings appear, uncover the pot. When the first 4 true leaves emerge, transplant your seedlings into individual containers. Once they reach several inches in height, they can be transplanted outside.

You can also propagate using stem cuttings of softwood. Take 6-inch cuttings in the summer from new growth. Cut off growing tips and place cuttings in a jar with one inch of water. In approximately 21 days roots will have developed. Transplant the cuttings into separate pots or outside. 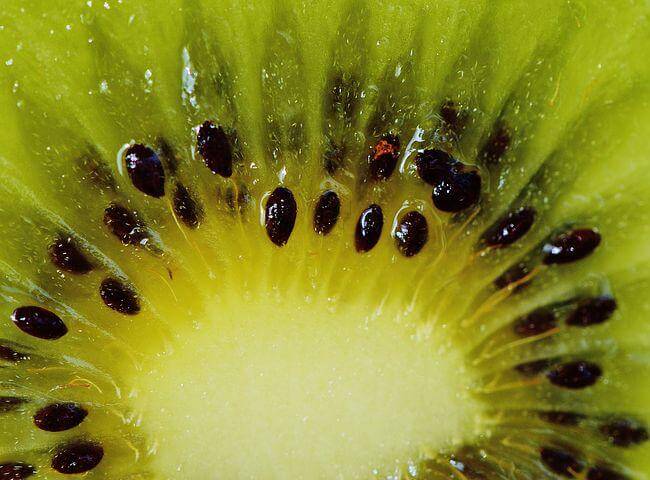 Once your vines have begun producing fruit, fruits will reach maturity between September and October, so be careful if frosts arrive early in your area. When kiwis are soft to the touch, it’s time to harvest.

If frost is a concern, harvest fruits while still firm but they should have black seeds. These fruits can be refrigerated for as long as 6 weeks. When you are ready to eat your refrigerated kiwi, take it out and let it soften before eating.

Kiwifruits keep well in a cooler or refrigerator for up to 6 weeks. If you have harvested hardy Kiwis, you can place these on a cookie sheet and freeze them. Once frozen place them in a plastic bag and leave them in the freezer, removing as you need.

The kiwi vine is susceptible to root rot if left to stand in overly wet soil. It also is at risk for Phytophthora Crown Rot.

The most popular female plant variety is the “Actinidia deliciosa Hayward”. This is the variety that produces fruit found in supermarket produce sections. Male plant varieties include:

If you wish to avoid pollination altogether, the Actinidia argutaIssaiis self-fertilizing. Varieties that require pollination include

For an Actinidia kolomikta consider the “Red Beauty” cultivar.

Growing kiwi is considerably easier than one might imagine. The trick is to find the correct variety for your regional climate.

When To Start Rosemary Seeds Indoors

When To Start Mint Seeds Indoors

When To Start Impatiens Seeds Indoors