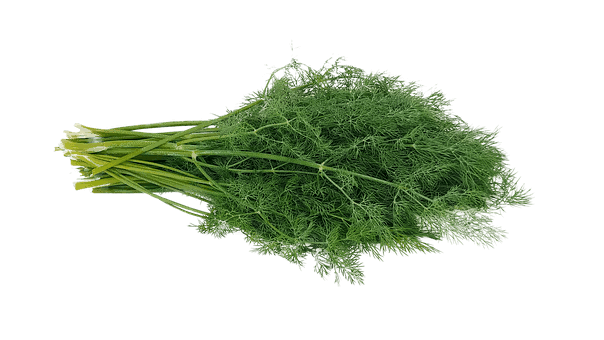 This culinary herb is known above all for its use when seasoning pickled foods that are canned or prepared in jars for the winter season. With a taste described as a mix between fennel and celery, it is used to season any number of dishes.

Foliage is feathery and attractive and tends to attract bees, pollinators, and even butterflies. It works well as a companion crop, but because it self-seeds it needs to be controlled.

Although its lacy appearance may cause one to believe it’s delicate, it is quite resistant to cooler weather. Best planted after the final frost has passed in spring, it is a rapid grower. When sown from seed, little seedlings should develop within ten days. Mature dill plants grow upright with many branches. Foliage is feathery but blooms are flat and can cause the plant to be top-heavy, which then bend over from the weight.

One benefit of cultivating dill is that the plant is extremely fragrant both seeds and leaves are considered to be seasonings, even if the blooms themselves are edible.

Botanically known as Anethum graveolens, this is an annual plant that finds its native habitat in Europe and Asia. It can be cultivated in USDA hardy zones 2 through 11 and can grow to heights of three to five feet and widths of two to three feet.

Some great dill companion plants include onions, corn, cucumber, and lettuce. Dill is known to improve the health of cabbages growing nearby. 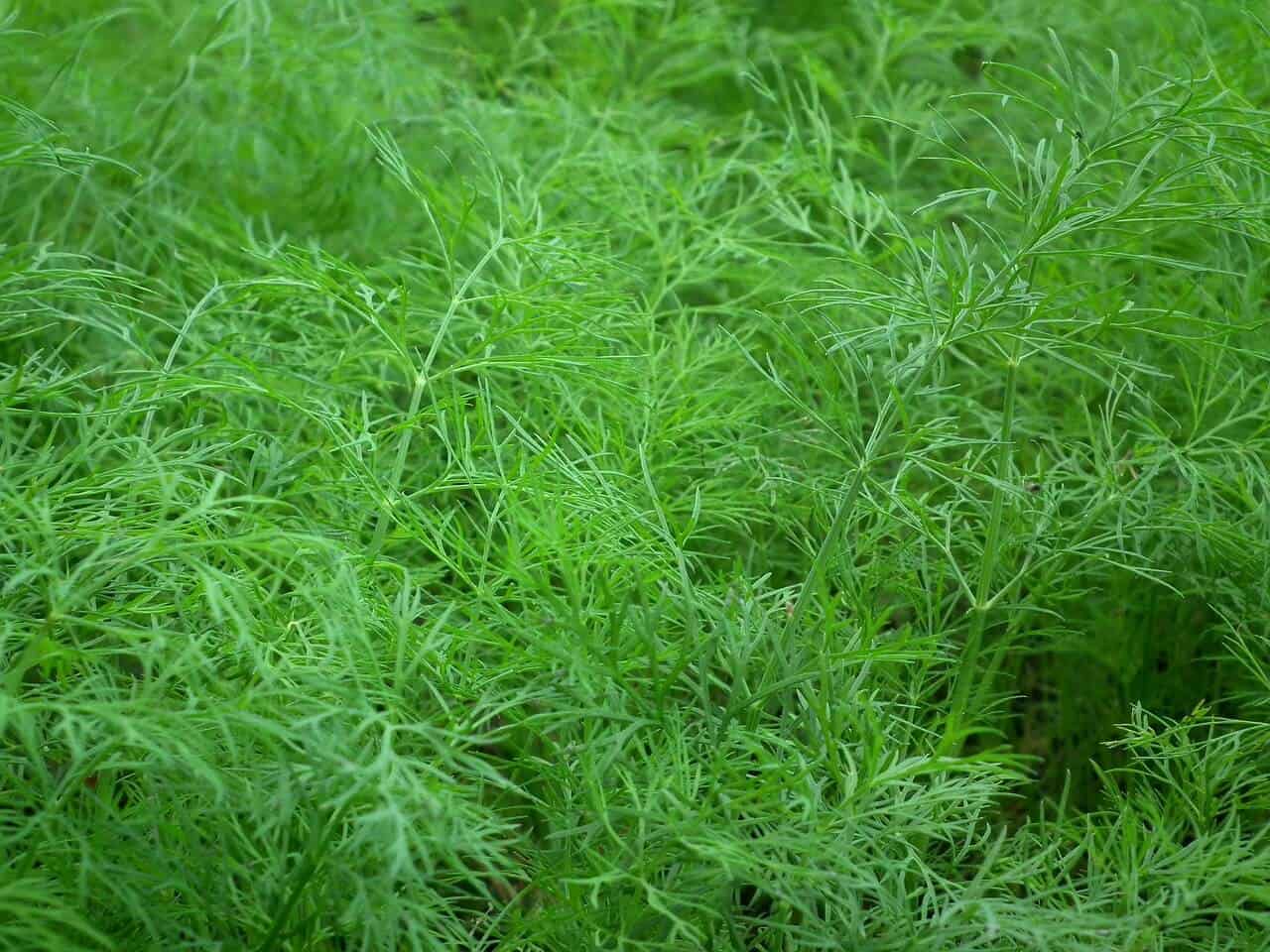 Starter plants can be purchased in most garden centers or nurseries, but it’s easy to just sow seeds directly in your garden bed. Because this plant is characterized by a very long taproot, it’s better to plant it in one place and then resist disturbing it in the future. Soil temperatures should sit constantly between 60° and 70° Fahrenheit before you sow seeds. It generally is planted from May to July. Once seeds are sown, seedlings will appear in ten days to two weeks. If this is a plant that you hope to harvest continually, you can continue planting seeds every couple of weeks.

For home chefs that are also gardeners, dill is fundamental for your herb garden. Foliage can be harvested at any moment. Dill will usually bloom approximately two months after seeds are sown. When blooms develop, dill plants will cease to produce foliage, because they focus all their energies on producing seeds. You can harvest dill seeds as soon as they start to turn brown. They do however need your attention, otherwise, the seeds will scatter by themselves. Dill seeds can be used upon harvest or they can be stored for up to roughly three weeks if kept in the refrigerator. You can also dry it or freeze it. Numerous culinary dishes use dill for seasoning including salmon, and many other fish recipes as well as lamb. It is also used in vegetables, potatoes, and bread.

Sow dill seeds in your garden at the time that the last projected frost happens. If you prefer to begin seeds indoors, do so six weeks before the final projected frost in seed starter trays. Do not put off transplanting your little dill seedlings because the taproot requires room to expand. When planting indoors take care to harden them for a week to ten days before doing a direct transplant.  When transplanting seedlings leave a foot of space between them.

Plant seeds approximately a quarter of an inch deep and space plants six inches from each other. As they mature, they will probably require some thinning when they grow to about six inches in height. Pinch growing tips regularly to encourage bushier plant growth.

When doing container planting, select a large pot that is one to two feet deep. Plants seeds in a multipurpose compost that is peat-free. Temperatures need to be above 60°F. so place your pots on sunny windowsills. When seedlings grow to about three inches in height, thin them out to plants that are four inches apart. Water regularly so that your potting mix does not dry out, but soggy soil is to be avoided at all costs. 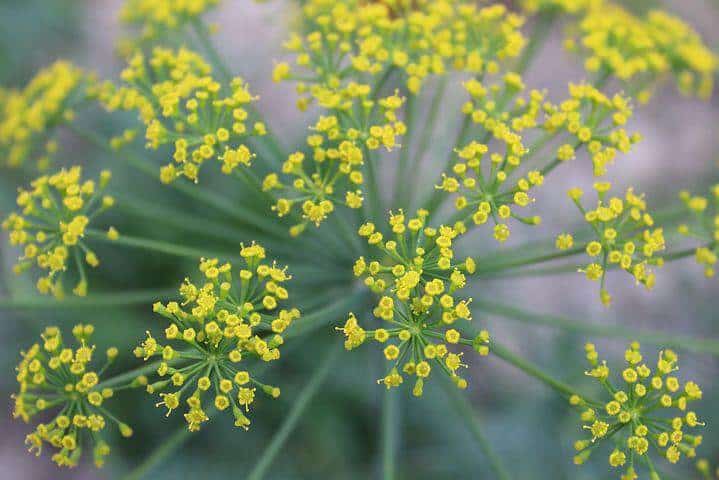 Dill likes a soil bed with loose, well-draining soil. While it is not picky about soil pH, it does thrive well in slightly acidic soil. The soil must never be allowed to become compacted because of dill’s taproot. This is a long central root that then develops smaller roots, thus the need for loose soil to accommodate root system development. Plant your dill in a location where it can expand because it will self-sow, or plan on harvesting regularly to prevent this.

Dill enjoys full sunlight exposure for at least six to eight hours daily. If your climate is very hot, you can cultivate dill in a spot with partial afternoon shade.

Dill requires a soil bed that is consistently moist always. Nonetheless, it will not tolerate soggy or waterlogged soil, nor soil that is allowed to dry out completely before being watered anew. If you allow the soil bed to dry completely, your plant may bolt to seed ahead of time. Dill has no particular requirements concerning humidity.

If your soil bed is naturally rich and fertile with organic matter, it will not be necessary to further feed your dill plants. Soil that is not over-fertilized will contribute to producing more fragrant plants. 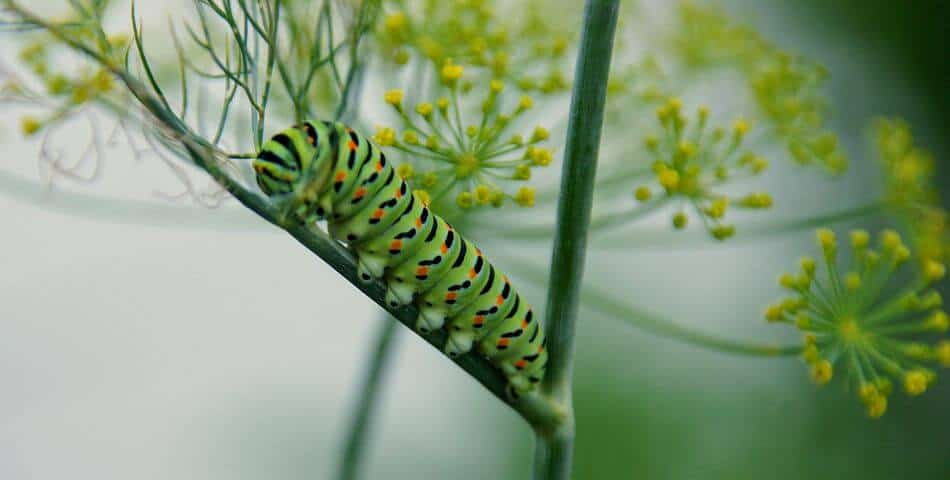 Dill is a problem-free herb to cultivate and even attracts beneficial insects to your garden such as lacewings. They also attract Syrphid flies that feed on the plant’s pollen, and they lay their eggs. Once they hatch and larvae appear, the larvae feed on aphids which damage so many garden plants.

They will attract caterpillars, usually a species that is known as the black swallowtail caterpillar that loves dill for dinner. However, rather than attempting to exterminate them, try planting a few extra plants to share because they will not remain in your garden for very long. If you can’t fight them, feed them!

Cut off dill leaves as you need them in spring and summer. Hang up harvested dill stalks upside down in a dark, well-ventilated space in a paper bag to allow leaves to dry. Once they have dried completely, place them in an air-tight container for ready use.

If you prefer to freeze dill, freeze the entire stems and cut off leaves as you need them.

If you wish to harvest seeds, once they turn brown in late summer, cut the stems and place the seedhead downwards in a paper bag. Hang the bag and allow seeds to drop off into it. When removing dried seeds from the paper bag, store them in an air-tight container.

Although treated as an annual, dill is a biennial plant that dies back to the soil surface during the winter only to reappear the following spring. Extremely harsh weather can kill a plant completely. In containers, the plant will continue year-round.

Between Spinach and Kale: Swiss Chard

A Must-Have Vegetable In Your Salad: Radish